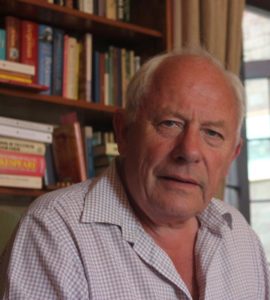 OBM Vaughan Southgate (1954-62) has been awarded an OBE for services to the community in Bedfordshire. The Queen’s Birthday Honours Lists recognise the outstanding achievements of people across the United Kingdom and of the 1,495 people who received an award in October 2020 just 260 were selected at OBE level.

Dr Vaughan Southgate spent his entire working life researching a parasitic disease schistosomiasis, more commonly known as bilharzia. He was based in the Department of Zoology at the Natural History Museum, London, but during this time made frequent visits to the tropics and sub-tropics of the world, especially sub-Saharan Africa, to carry out field studies. At the Museum he was Head of Biomedical Parasitology; Director of a World Health Organisation Collaborating Centre; and a member of the Expert Panel on Parasitic Diseases of the WHO. He served as President of the Linnean Society of London (2009 -12) and has also sat on various other advisory committees.

However, it is for services to the community in Bedfordshire which Vaughan has been recognised. After retiring from the Museum nearly 16 years ago, he became High Sheriff of Bedfordshire (2007 – 2008), was appointed a Deputy Lieutenant and has recently become Chairman of the Trustees of Bedford Hospital Charity and Friends, which does sterling work for a very worthy cause.

He is also a loyal and generous supporter of Bedford Modern School where he was a student from 1954 until 1962, serving as the President of the Old Bedford Modernians’ Club in 2013. He said: “I spent my formative years at the school and it was there where I discovered my love of the natural world and received much help and encouragement.”

Speaking of his award, Vaughan added: “I am delighted to be honoured by the Queen and would like to take this opportunity of thanking colleagues, friends and family for their support over many years.”

Many congratulations to Vaughan for whom this honour is richly deserved.