On Tuesday 29 March, Year 12 students Samuel Manning and Zak Mounter took first place in the inaugural Schools Debating competition, hosted by the Office of the Bedfordshire Police and Crime Commissioner (OPCC). Current Police and Crime Commissioner, Festus Akinbusoye, pledged to launch this annual debating competition prior to his election in late 2021.

Stuart Baker, Head of Politics at BMS, said: “I was very impressed with the way our students conducted themselves throughout. I believe the initial rounds were an excellent way of garnering experience at public speaking in an online space, which will only become more commonplace in the future.”

The final round took place at Bedford Magistrates Court, which meant that the students involved could experience debating in a real-life parliamentary setting. The proposed motion was the contentious topic of whether schools should have the power to do a body search on pupils on school premises. This was a tricky format, in which the speakers were given six minutes to argue their position, but were free to be questioned by their opposition between minutes two and five.

Of this experience, Zak said: “We both felt nervous and did not expect such a large and full room with so many people involved. It was most definitely a tough debate with the opposition providing a strong emotional argument. I was over the moon when we won and really pleased to have taken part in such a tough challenge which developed our skills quite clearly round on round.”

Festus Akinbusoye was quoted as saying: “The competition was a great spectacle of what our young people are capable of when given the opportunity. I am very passionate about giving young people the chance to develop not only their public speaking skills, but also their self-esteem and more importantly giving them the ability to talk about a topic from different angles – which they have demonstrated they can do very well.”

The boys have secured The Commissioner’s Cup and a £500 prize for the School, which they hope to use to establish a reward for a future BMS debating competition. 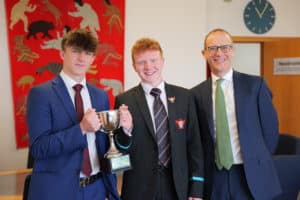