Bedford Modern School (BMS) students Jade Ajibola (Year 12) and Francesca Carter (Year 10) have been selected for the highly competitive National Youth Theatre (NYT) summer course this year at Goldsmiths in London between 29 July and 10 August. Jade and Francesca, who are both actively involved in Performance Arts at BMS, were picked from the 6,000 hopefuls who auditioned across the country between January and March. On completion of the intensive two-week course they will become NYT company members and able to access a range of performance and talent development opportunities.

Francesca auditioned in Northampton and Jade in Cambridge. Each audition consisted of a three-hour workshop with 40 other young actors, where the candidates took part in improvisation workshops with NYT Associates in the morning, and presented a monologue of their choice in the afternoon.  The talented pair spoke enthusiastically about the experience and explained how they had learnt a great deal about dramatic techniques and group work during the sessions. 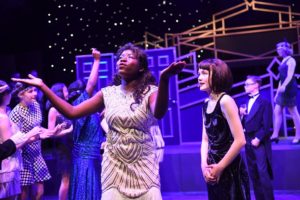 Modestly, the girls expressed disbelief at their success.  Jade said: “I was shocked but delighted to have been chosen. I was surrounded by so many great actors in the auditions so to be recognised is this way is fantastic.” 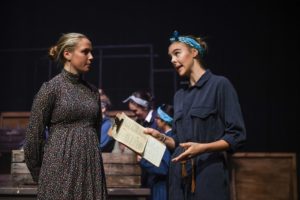 Francesca added: “I was so surprised as we had heard that it is unusual to get through on your first attempt. I am so excited and really looking forward to taking part in the course in the summer.”

Laura Coltman, Director of Performance Arts at Bedford Modern School said: “We are very proud of Jade and Francesca and their achievement.  It is super to see the continued success of our students when auditioning for such prestigious companies. Both have been part of the two main school productions this year and I look forward to seeing them develop even further in the future.”